Note: this blog article was written for the November 2010 election.

Is this really happening in America?

Yesterday I came home after walking my dogs and noticed that all of the campaign signs of the candidates that we support (located on one of the Cape’s major highways) had been stolen. After checking the area to see if the signs had just been pulled and thrown down (done on many prior occasions) it was clear that the signs had been stolen.

The signs were located on private property, all but one, well behind the 25′ setback from the highway and most on an approximately 6′ – 8′ hill above the highway (Waquoit Highway in Massachusetts). 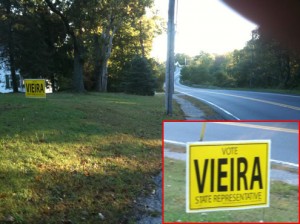 Our Republican signs were removed by the Mass Highway Department under the guise of, “interfering with traffic”.

Our Republican signs were removed by the Mass Highway Department under the guise of, “interfering with traffic”. 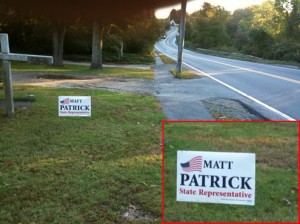 Yet, a few feet away in our neighbors yard, closer to the highway, the Democratic signs were left untouched.

Yet, a few feet away in our neighbors yard, closer to the highway, the Democratic signs were left untouched.

I reported the theft to the Falmouth Police Department (See Police Report) and officer Charles D. Marken responded. Officer Marken stated that there was a recent story in the Cape Cod Times that the Massachusetts Highway Department would remove signs that interfered with the traffic on the highway. Due to the location of the signs, I stated to him that there was absolutely no way that my signs interfered with anything but someone’s opposing political opinion. Officer Marken and I then went over to see where the signs were located. He agreed that they could in no way have been removed in accordance with the regulations (the first-time ever action of removing said signs by the Massachusetts Highway Department) as they could in no way have interfered with traffic. Additionally, there is a Democratic candidate’s sign just a few feet away in a neighbors yard, on the same side of the highway which is much closer to the highway. Based on the facts, he determined that the signs were stolen from private property, most likely from a party that did not agree with our political views.

I was obviously upset that here in America things had gotten so bad that people were stealing political signs that didn’t express their personal views.

I received an email from Republican Candidate for Massachusetts State Representative, David T. Vieira, in response to his team replacing their sign which stated:
“Thanks Jesse, the signs were taken by the Massachusetts Highway Department because they appeared in the “legal” layout of the road. First time they ever enforced this obscure law in Falmouth. My sign team is working to resolve the issue. I will let them know about the Carriage Shop property as well. Thanks for your support! ”

When I received that email, I was outraged. Here is the relevant text of my two emails to Mr. Vieira. I apologize for the redundancy but I wanted exact quotes:
Email #1: “In my opinion, this is election tampering. 50′ away and closer to the road is a Patrick sign that no one touched. Additionally, three of the signs were 25’+ from the road. Unless it’s changed, there is only a 25′ setback here and the signs were on private property. It is far more likely than not that the signs in front of my house were removed as they supported Republican candidates.”
Email #2: “I forgot to mention one major thing. I reported the missing signs stolen to the Police this morning. As a result, an officer Charles Marken responded. He mentioned the article in the Cape Cod Times about the highway department which he said stated “signs that were too close to the road would be removed”. After he reviewed where the signs had been located, he stated that my signs were by no means interfering with the highway. He felt that they were stolen and he filed a Police Report that will be ready tomorrow.” (See Police Report)

How can there be any question as to what happened, and is happening here in Massachusetts. The Massachusetts Highway Department with its union members being overwhelmingly Democrats, are removing GOP signs from high traffic areas not for cause, but for purely political reasons.

I am replacing the signs and will take whatever action necessary to preserve the integrity of our voting system and our rights. I feel I have no choice. The unions, with state sanctioning, are bringing back the the union tactics of the 20s and 30s.

We are wondering who to report this to. The U.S. Attorney General’s Office? The Massachusetts Attorney General’s Office? We would be better off calling Ghost Busters. This is what the Obama, Reid and Pelosi administration not only tolerate, but facilitate and promote. Don’t let this continue. Stand up for your rights before it is too late. Do what they obviously fear most: VOTE!