“Judicial Overhauling” is in the air. A term that goes beyond Court Reform and to the heart and sole of the problem, the greed by those that can’t create and whose only skills, are to feed on those that can: The Attorneys. 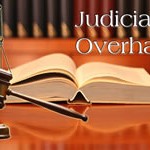 “Judicial Overhauling” Do you remember the story of “Ali Baba and his 40 thieves?” That comes to mind when we hear of the Bar Association.  The Sixth Amendment says you may “have the Assistance of Counsel for his defense”.  It says nothing about what “Ali Baba” would have you believe, an attorney.

“Judicial Overhauling” The Bar Association was formed over 100 years after the Sixth Amendment was written, in 1878. A review of the Bar Association Lobby leaves little doubt, it’s about the money to keep the affluent lifestyle of attorneys in full bloom. So why on Gods green earth do we let attorneys police themselves?  And we let them do so with our lives and livelihood. The fox is guarding the hen house, and we are the chickens.

“Judicial Overhauling” is the term to think of when you think about, and talk about cleaning up our Judicial System from the ground up, starting with the attorneys, up to and including the judges. Note that we didn’t capitalize the words attorney or judge. Their egos are already over inflated.

First, we must stop the arcane practice of allowing Governors and a President handing out political favors know as Judgeships. We must provide a means for us to remove a Judge. Weather you are for the Election of Judges or the Modified Missouri Plan proposed by the only citizen who successfully led an Impeachment Effort, one that actually got the Judge removed.

No matter if you support the election of judges or a Modified Missouri Plan, we must change the laws to provide for the removal of Judges. Their absolute power has corrupted far too many Judges.

The Modified Missouri Plan proposed by Mr. Torres would modify the 74 year old Missouri Plan used in several states and numerous countries. Basically the Missouri Plan uses an appointed committee, which creates a small list of candidates to fill a judicial vacancy. The Governor then selects his appointee from that list. After a year, the Appointed Judge faces a confirmation election. Once confirmed by a vote of constituents, the Judge generally enjoys a lifetime appointment.

The problem as Mr. Torres sees it, is after the confirmation election, if the judge goes rogue, thinking they were “anointed not appointed”, there is no way to remove them other than by Impeachment, which he personally knows is not a valid safeguard.

Mr. Torres’ plan would allow good Judges never to face another election while providing safeguards to remove the rogue Judges. Lets face it, knowing that they can be removed by the voters will make for a much better judiciary in the long run.

Whether you favor the election of Judges or the Modified Missouri Plan, there has to be a mechanism for us to remove a Judge. We can’t do worse than our current system.

The Attorneys and Bar Association

We now have a nation that produces more attorneys than scientists and engineers. The reason is simple, greed. The Bar Association is more about preserving the income and lifestyle of attorneys than anything else. There is a way to stop this dangerous trend.

We must adopt “Loser Pays” which will strangle attorneys’ income from frivolous lawsuits and help bring sanity back to our nation and affordability to many services whose costs have sky rocketed so that attorney’s can flourish. This would bring about a drastic reduction in medical costs.

We have to get back to what made this country, once the greatest nation on earth. We must return to a nation of creators. We must produce scientist and engineers who will create and build us back to the strongest economic power in history. Before we start using Shackspeare’s words and “kill all of the lawyers” we need to stop allowing the weasels to police the chicken coop. Attorneys need to be made accountable to more than other attorneys or Judges, who are also attorneys.

We need to stop what is the greatest threat to all Americans, the self-perpetuating and ever expanding universe of frivolous lawsuits. An old adage expressed as only Mark Twain can,

It’s time to starve a few attorneys, so that the rest of us can once again prosper.

Originally published by the Freedom Network