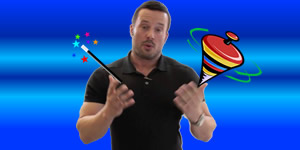 The Obama Administration has somehow made spinning the truth more believable than the actual facts. Worse, it has turned an entire generation into actually believing that facts don’t matter any longer, only how you spin them.

This is a story about just such a Obama Disciple, Jesse Stockwell. Like most before Generation X, we still believe that it is the truth that matters. We come from a generation where “Truth, Justice and the American Way” meant something.  Jesse Stockwell and his ideals are, we believe, the result of Obama’s ideology turning the greatest nation on Earth into what it has become and what we can expect if it continues. The following story struck a nerve with us as we believe it will with you.

Jesse Stockwell, who considers himself “The Steve Jobs of Consumer Finance”, as stated on his Spin Machine website, SuperMoney, continues to refuse to answer direct questions put forth by the U.S. Freedom Network Investigative Blogs.

Jesse  instead chooses to “spin” and “dance”, clearly intending to divert the reader’s eye from the questions of how he made his money from a long line of businesses shut down or under investigation, by Federal and state government.

Businesses like “Junk Mortgages”, “Debt Repair”, “189% interest Loans”, and the biggest payday of them all, “Tax Relief”, the same industry for which the IRS issued a warning about the tactics they use to lure in prospective victims including fancy television and radio ads. Have you seen Allen Thicke pitching Optima Tax Relief using scare tactics?

This story was inspired after our sister Investigative Blog, The United States Watchdogs, published Optima Tax Relief / Jesse Stockwell: And The Spin Goes On, after Jesse Stockwell updated his website. We believe this update was to avoid answering our questions, in an attempt to spin the facts from unsuspecting visitors. While Jesse Stockwell may think of himself as “Steve Jobs”, his practices appear to us to be more like “David Copperfield” in that he tries to make the facts disappear.

We believe that Jesse Stockwell, or Mr. Hubris as we refer to him, should stop insulting those who are actual creators, like Mr. Jobs. We have found no credible evidence that Jesse Stockwell has ever created anything except a way to make millions from the backs of unsuspecting, hard working people. Readers, please take the time to read, Wealth on the backs of Mexican-Americans?

Our stories on Jesse Stockwell, previously known as Jesse E. Torres IV, started over 3 years ago when a lawsuit with specific R.I.C.O. charges were filed against him and his then fashionable (to him) company, Debtmerica. Our story grew as we dug deeper into Jesse Stockwell’s past and his trail of companies that all had a similar pattern, they were all in industries virtually shut down by Federal and State Government.

As the story broadened, many of our sister Investigative Blogs started picking up on just how deep this story was, and started to do their own investigations and stories. Charges were made against Jesse Stockwell and his long list of companies which appear to last only as long as they remain under the radar of Federal and State Agencies.

The United States Freedom Network Investigative Blogs and Spotlight Websites have uncovered what certainly appears to be connections to convicted criminals and a laundry list of charges for bad acts. Jesse Stockwell and Joanne Stockwell (Jesse’s Mother, who has been compared to Ma Barker) and Jesse’s many companies, have been given many, many opportunities to tell their side of the story, and have declined to do so.

We believe that they have never responded to the many charges against them due to the large amount of evidence obtained by the United State Freedom Network Investigative Blogs.

Jesse Stockwell, formally Jesse E. Torres IV, seems to think he can run away from his past without so much as an apology, to his father for standing by James Kimberly Torres and his bad acts (Arrest Warrant) or to those from whom he made his wealth.

Recently Jesse Stockwell changed his personal blog, jessestockwell.com, in what, to us, was an obvious attempt to spin the facts uncovered about him. Once again he got caught and a new story showing just how devious Jesse Stockwell can be, was published by our sister blog, the United States Watchdogs.

He can run but he can’t hide

From Jesse E. Torres IV to Jesse Stockwell. He has now all but disappeared from his company websites and has stated that he wants to get back to rural life. Jesse, we will be there.

PROTECT YOURSELF: For anyone who is considering doing business with Jesse Stockwell or any of his companies, this is a must read story.