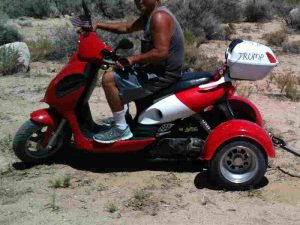 Two Bishop California Bureau of Land Management Rangers, Ranger Becky L. Hutto ([email protected], 760-872-5008) and Ranger Chris Mason ([email protected],  760-872-5000) are under investigation by the U.S. Watchdogs after a well-documented complaint was filed with the U.S. Watchdogs. After review of the complaint, Obama Muscles opened their own investigation into the potentially criminal actions of Conspiracy to Influence an Election. The U.S. Watchdogs and Obama Muscles sent their respective complaints and inquests to the Bishop Field Manager, Steve Nelson ([email protected], 760-872-5011), and separate inquests to accused Rangers Becky L. Hutto and Chris Mason. Obama Muscles is concentrating on the conspiracy aspects of the complaint while U.S. Watchdogs is scrutinizing the others. It appears that two of these alleged infractions exceeded the standards to meet the guidelines published by the Justice Department as Conspiracy to Influence an Election: Department Of Justice Guidelines.

The Bishop Bureau of Land Management attracts many near-homeless campers to their LTVA (Long Term Visitor Area) campgrounds, making it easy to find people who are very happy to become camp hosts for the person listed as the Recreation Ranger, Becky L. Hutto. These camp hosts earn far less than minimum wage and their situation appears to make them very malleable and subject to the wishes and influence of Ranger Becky L. Hutto who allegedly hunts them down anywhere, even in Bishop while they’re shopping.

Incompetence or mismanagement cause BLM LTVA to announce fee increases from $180 to $900?

Apparently, if Ranger Becky L. Hutto can’t find Hosts who are willing to take on far more cleaning and other duties than we have witnessed at other Bureau of Land Management Campgrounds, Ranger Becky L. Hutto and her fellow Rangers like Chris Mason, have to clean the many, many toilets themselves. We guess that as Ranger Becky L. Hutto makes $52,715.00 per year while her neighbors in Bishop, CA average just $25,443, she believes it is beneath a Ranger who makes over double what her neighbors make, and far more than the approximately $500 a month she pays her Hosts. After all, she makes about 8-1/2 times what she pays them. To be fair to Ranger Becky L. Hutto and the Bishop Field Office,  a few of the Hosts do get free water and all get a place to park in the desert. Let’s take a vote: Should we name her Becky the Humanitarian? Let us know what you think below.

We will leave it up to you, our readers, to decide if cleaning toilets was the motivation behind the $52,715.00 a year Ranger Becky L. Hutto’s hiring a convicted murderer, or did she ignore the requirement of the Bureau of Land Management to run a background check on potential Hosts? If you can think of any other reason please let us know.

Now that you have a little background on what we believe to be the character of Ranger Becky L. Hutto and just how strong her influence is over her Hosts, we will come to the part of the investigation that got us here at Obama Muscle to start our own investigation into the matter of Conspiracy to Influence an Election: Department Of Justice Guidelines by Rangers Becky L. Hutto and Chris Mason. We will let the inquest sent to the Bishop Field Manager, Steve Nelson ([email protected], 760-872-5011) speak for itself:

Subject: Conspiracy To Influence An Election

I am writing you from Obama Muscles at http://obamamuscles.com as we received notice as part of the U.S. Freedom Network that a complaint filed with the U.S. Watchdogs has been escalated to level II.

The policies of U.S. Freedom Network members was laid out for you in the email sent to you on Thursday September 8, 2016 from [email protected] and we restate those policies for Obama Muscles as if specifically stated herein.

We reviewed the documents at bishop-blm.uswatchdogs.net. Although the majority of the issues raised were egregious, they were in our opinion, only misdemeanors that warrant dismissal and/or a permanent letter of reprimand in the files of Rangers Becky L. Hutto and Chris Mason.

What caught our attention, however, was what we believe is a Class A Federal Felony. For your reference please see the published Federal Guidelines from the Justice Department on just what constitutes a Conspiracy to Influence an Election: https://www.justice.gov/sites/default/files/criminal/legacy/2013/09/30/electbook-0507.pdf

It has never been denied by Becky L. Hutto or your office that she ordered your Host, Sean Landenburger, to remove any messages displayed on his personal vehicle expressing support for Donald Trump. That is a Federal Crime if true. Then after reviewing the copious notes on this matter we found that when your Host, who removed the hand written support messages then reapplied an election bumper sticker, was then ordered by Chris Mason to remove the bumper sticker stating words to the effect, “Didn’t Becky tell you to get that stuff off? Remove it now.”

That elevated it to “A conspiracy to Influence an Election”, according to our interpretations of the Justice Department Memorandum. When two Federal Employees conspire to influence an election, you now have, we believe, a Class A Criminal Federal Felony. With sworn affidavits from numerous parties, and before and after pictures, this is very difficult not to believe.

Just a few questions before we publish a story on this:

1) Did you order Ranger Becky L. Hutto to order Sean to remove any and all references to “TRUMP” from his personal vehicle?

2) Were you aware of the actions of Becky L. Hutto and Chris Mason concerning this matter?

3) Do you deny that Ranger Becky L. Hutto did use her influence as a Ranger in charge of the income of the Host, Sean Landenburger, to order him to remove any messages displayed on his personal vehicle expressing support for “TRUMP”.

4) Do you deny that Ranger Chris Mason did use his influence to enforce the illegal actions of Ranger Ranger Becky L. Hutto to force Host Sean Landenburger to remove any messages displayed on his personal vehicle expressing support for “TRUMP”?

You have 24 hours to reply to this email. We will be publishing a story on this matter and then sending it to the news agencies outlined in the U.S. Watchdogs’ correspondence with you. Additionally, we will be sending it to Judicial Watch and the Lead Counsel in the Trump Campaign.

This act by two Federal Employees is beyond comparison. The Black Panthers got away with intimidating voters during the last Presidential Election. We wonder if two or three Federal Employees will be as fortunate with the next administration. You may want to familiarize yourself with the term “High Crimes and Misdemeanors”.

We are forwarding this to U.S. Watchdogs to be included at the document site at bishop-blm.uswatchdogs.net.

Neither Ranger Becky L. Hutto, Ranger Chris Mason nor Bishop Bureau of Land Management Field Manager Steve Nelson ([email protected], 760-872-5011) answered or denied the charges filed against them. They do have rights guaranteed them to not testify against themselves, so we will let our readers decide if they are pleading the fifth.

Talk about irony: allegedly, Rangers Becky L. Hutto and Chris Mason denied the Host his Constitutional Rights forcing him to remove his political banners from his personal motor scooter. Now, apparently, they want to hide behind those very same rights they denied him. And it gets worse, we borrow a paragraph from our sister news site uswatchdogs.net:

“Did she [Ranger Becky L. Hutto] order a camp Host, who was dependent on the job directly supervised by Ranger Becky L. Hutto, to remove any writings or stickers supporting ‘TRUMP’ from his personal motor scooter? She is also charged with allegedly conspiring with Ranger Chris Mason to enforce these illegal acts that not only violated the Host’s Constitutional Rights, but violated the guidelines published by the Justice Department as Conspiracy to Influence an Election, available here: https://www.justice.gov/sites/default/files/criminal/legacy/2013/09/30/electbook-0507.pdf. We anticipate that this is a Class A Federal Felony. However, it will take more than the sworn witnesses’ affidavits and testimony to prove these charges because, unlike the poor host whose Constitutional Rights appear trampled by Ranger Becky L. Hutto, she has rights provided to her by her union and an attorney paid for by, you guessed it, us taxpayers.

We will have part II of this story available shortly.