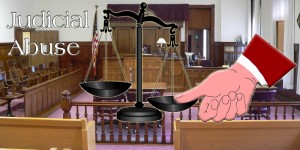 Judicial Abuse is becoming an epidemic in the United States. Judges are almost daily legislating from the Bench. Politics are becoming the determining factor in too many cases’ outcomes. What most don’t know is that these same Judicial Abuses perpetrated by English Courts were a fundamental reason for our own Revolution.

Today’s Judicial Abuse extends into the Courts themselves. We’ve shown examples of the Clerk’s office, responsible for the filings of pleadings and bringing them to the attention of the presiding judge, “forget” to file some and not markup others for hearing.

While there are many Judges who clearly do a fine job, the tide of bad Judges is rising far too fast. It is long past due for a “Judicial Overhauling“.

The purpose of our Judicial Abuse Section is to bring to the forefront those Judges and Clerks who abuse the power of their offices. To raise public awareness of the bad judges, especially those who abuse the poor, without fear of media attention. Those whose abuses are never reported by the main stream media. To give those who would be unknown, those whose Civil Rights have been abused, a voice.

Our first stories are about the Massachusetts Barnstable County Courts who we became familiar with in our Pro Se coverage of the case of Torres v. Torres. When the case was Appealed (the Pro Se Litigants won), transcripts of the three hearings of the case were made public. This, unexpectedly we’re sure, made the Judges in that case look like, well, fools, with their remarks now on the record. Remarks apparently so embarrassing that the tapes of the hearings were never turned over to the Pro Se Plaintiffs, even though they were so ordered.

We’re receiving more and more reports of judicial abuse, many of which we’ll be covering in future articles. We became aware of the judicial abuse of Judge Christopher J. Muse and the Barnstable Superior Court Clerk’s Office, Scott W. Nickerson, Clerk Magistrate, while covering Torres v. Torres, a case in our exclusive Pro Se series.

Sidebar: The Plaintiff in Torres v. Torres is Jesse E. Torres III. He was the Founder of the “Committee to Impeach Judge Shirley R. Lewis”, the only citizen effort that successfully removed the Judge, but only after a battle that lasted over two years.

To locate other stories of Judicial Abuse please use our site search and categories links. Also check out the other Freedom Network websites like obamamuscles.com.