Traveling in the U.S.? Your social security number may end up in a Secret Police Database! 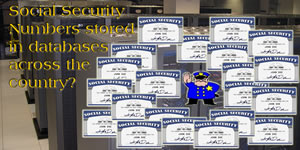 A letter was sent yesterday by the New England Watchdogs to the Falmouth Police Chief Anthony J. Riello offering him a chance to respond to allegations that his department was routinely asking law abiding citizens who report or were victims of crimes in the Town of Falmouth; that his department was coercing these citizens to give their social security numbers to responding police officers. Further, these citizens social security numbers, without their knowledge, were then added to secret police databases.

The story can be found here. What has become more shocking is it appears that Police Departments throughout the United States are also building these secret databases of their citizens’ private information, which includes their social security numbers.

The letter asked the chief some very direct questions: “why are you collecting the social security numbers of law abiding citizens that report, or are victims of crimes? as well as: for what purpose are these databases used? and, Who has access to them?” For these and many more troubling questions about what is more likely than not, going on in your police department, see the full story here.

A copy of the letter sent to Falmouth Police Riello can be found here.

Reprinted with permission from www.newatchdogs.com