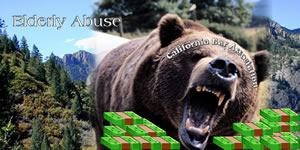 A Complaint filed with the Oceanside Police Department alleging among other crimes, embezzlement and crimes against the elderly by Lightning Property Management and its owner Attorney Lorraine Rosenfeld and others, was sent to the San Diego District Attorney for prosecution after the investigation by Oceanside Police Department’s Detective Michael Provence. This investigation was in coordination with the California Department of Real Estate whose own investigation included a complete audit of Lightning Property Management and we believe its owner, Attorney  Lorraine Rosenfeld.

As stated in the complaint:

While the egregious acts as set forth above were clearly premeditated, and without justification or cause, what makes these bad acts stand out so blatantly, is that they were committed by, or were known, or should have been known, to Lorraine Rosenfeld, a member of the California Bar. This standing as a licensed California Attorney was relied upon by the Complainants as it had been “advertised to them” by Attorney Rosenfeld, and they did so to their detriment in the amount of $30,499.75.

Now, according to an email from Detective Michael Provence from the Oceanside Police Department:

I sent the case to the San Diego County District Attorney’s Office for prosecution. They can take three possible actions. 1) File the case and proceed with prosecution. 2) Reject the case and not prosecute. 3) Request that that additional follow-up be conducted prior to filing the case. On average this takes between 60-90 days.

Where the case is going is up to the San Diego District Attorney’s Office and ultimately District Attorney Bonnie Dumanis. While we all understand that justice moves slowly, we are going to stay on top of this case. We sent Detective Provence an email asking him if he would provide us some answers to the following questions while noting that:

We are just as motivated to tell the story about those who do their
jobs well. So we hope you will comment on the following:

Detective Provence responded, with the following:

We are formulating a formal response to your questions. Either myself or the Oceanside Police Department Public Information Officer will contact you next week with that response.

We would like to thank Detective Provence for both his work thus far and his cooperation with us in publishing such an important story for Senior Citizens. Also, Californians should be proud of the California Department of Real Estate for their investigation and audit into this matter. Without their efforts, Attorney Lorraine Rosenfeld, who has five prior convictions on file with the California Bar Association, and her company Lightning Property Management, would have once again slipped through the hands of justice.

If the California Bar Association were made up of non-attorneys, they never would have let Attorney Lorraine Rosenfeld slide by such a complaint without an investigation or suspend the previous convictions against her. But the Bar Association is made up of attorneys and they will smirk and pat themselves on the back for the way they twisted the truth into something that justified a fellow attorney’s bad actions.

As soon as we receive the response to our questions from Detective Provence or the Oceanside Police Department, we will get the information here for our readers. We hope to publish two stories, one on the case itself, and a second in a new series on how Senior Citizens can protect themselves from scams like the one now in the hands of the San Diego District Attorney’s Office.

Will San Diego District Attorney Bonnie Dumanis bring the weight of her Office down on Lightning Property Management and Attorney Lorraine Rosenfeld, as clearly demanded by the Oceanside Police Department and the California Department of Real Estate investigations? Or will they let Attorney Rosenfeld once again avoid any real penalties for her actions, as the California  Bar Association has done time and time and time again? Will the San Diego District Attorney’s Office of Bonnie Dumanis, make it clear that no one, not even an attorney, is above the law?

Sometimes you need to get at the root of a problem:

There is a far deeper issue here and that is in correcting our Judicial System which has gone amok. From our Judges and how we appoint them to the self-serving Bar Association with its lobbyists and big money-making laws that serve no benefit to anyone but themselves. The Bar Association is about money, big money.

We have to get back to what made this country the greatest nation on earth. We must return to a nation of creators, one that produces scientists and engineers who will build us back to the strongest economic power in history. We must legislate “Loser Pays” and cut off the head of the snake, the greed that draws so many into the law profession.

We must stop the arcane practice of allowing Governors and a President from handing out political favors know as Judgeships.

We must provide a means for us to remove a Judge. Whether you are for the Election of Judges or the Modified Missouri Plan proposed by the only citizen who led an Impeachment Effort that successfully removed a Judge, you need to get involved.

We need to stop what is the greatest threat to all Americans, the self-perpetuating and ever-expanding universe of frivolous lawsuits. An old adage expressed as only Mark Twain could:

Originally published by the Freedom Network.